Joint Comment from Intact America and Attorneys for the Rights of the Child, submitted during the public comment period in Response to the Centers for Disease Control and Prevention (CDC) “Recommendations for Providers Counseling Male Patients and Parents Regarding Male Circumcision and the Prevention of HIV Infection, STIs, and other Health Outcomes.” The following comment was prepared jointly by Intact America and Attorneys for the Rights of the Child – both not-for-profit organizations dedicated to protecting children from medically unnecessary, disfiguring genital surgery to which they cannot consent. It has been slightly edited (for length and format) from the version posted on the CDC’s official comment page. In compiling its proposed recommendations, the CDC has ignored the considerable and reputable literature from the fields of medicine, medical ethics, law, and human rights that calls into question the legitimacy of foreskin removal (circumcision) as a health care measure. Recommendation #1 acknowledges that routine circumcision in the United States, though performed “medically,” is primarily a religious, social, cultural and cosmetic procedure. As such, and in the absence of a diagnosable pathology, the circumcision of infants and children, and the circumcision of any individual in the absence of truly informed consent by physicians who understand the normal male genitalia and the function and benefits of the foreskin, is unethical. The CDC fails to mention that numerous medical organizations, legislatures, physicians and ethicists from European and Commonwealth countries with sophisticated medical systems and lower rates of sexually transmitted infections (STIs), including HIV, have criticized the American medical establishment for its cultural bias toward circumcision, for exaggerating the procedure’s benefits, and for ignoring and understating its risks and harms. The CDC also fails to acknowledge that even the merest pin prick of a minor girl’s genitals – whether motivated by religion, culture or aesthetic preference – violates federal laws against “female genital mutilation.” The United States Constitution guarantees equal treatment of females and males, and thus the circumcision of non-consenting male minors combined with the protection of female minors constitutes illegal discrimination. It also may constitute establishment of a religion in violation of the United States Constitution. Recommendation # 2 states that all sexually active adolescent and adult males need to use “other” (i.e., other than circumcision) “proven HIV and STI risk-reduction strategies….” The question must then be asked: Why perform surgery at all? Recommendation #3 fails to mention that there has been no systematic longitudinal study of the longterm harms and complications from neonatal circumcision – many of which doctors are not taught to recognize and some of which do not appear until later in life. Nor do the recommendations acknowledge that unnecessary surgery in itself causes harm. As a California Appeals Court has stated, “Even if a surgery is executed flawlessly, if the surgery were unnecessary, the surgery in and of itself constitutes harm. Tortorella v. Castro, 140 Cal.App.4th 1, 43 Cal.Rptr.3d 853, Cal.App. 2 Dist. (2006) Recommendation #4 fails to mention:  Urinary tract infections can be treated in boys, as in girls, with simple antibiotics rather than by the surgical removal of a normal healthy body part.  Balanitis and balanoposthitis are easily treatable with topical creams.  Penile cancer is extremely rare, and no medical organization (including the American Cancer Society) recommends circumcision as a preventive measure. The CDC’s reference to a “possibility” that circumcised males are less likely to experience prostate cancer is speculative and unproven and therefore its mention by the CDC as an argument for circumcision is inappropriate.  The CDC acknowledges that “the risk [of HIV and STIs] for any individual neonate, child or adolescent cannot be definitively defined at the time that a circumcision decision is made.” The CDC also shockingly fails to examine and weigh the immunological, protective, erogenous, and other functions of the tissue that is to be removed. Unknown risks and omitted harms cannot be meaningfully weighed against asserted benefits.  Surrogate (i.e., parental) permission for a procedure on a child is only valid in the case of a serious or life-threatening disease or illness. The American Academy of Pediatrics (AAP) states that the surrogate is limited to providing “informed permission for diagnosis and treatment of children.” American Academy of Pediatrics Committee on Bioethics. Informed consent, parental permission, and assent in pediatric practice. Pediatrics 1995;95(2):314–7 Non-therapeutic child circumcision is neither diagnosis nor treatment and thus falls outside parental power to consent. A normal boy with a normal foreskin should never be a candidate for circumcision surgery.  Regarding “the timing of male circumcision,” the CDC’s recommendations inexplicably dismiss the important fact that infants are not at risk of STIs. The recommendations also mention the lower cost of neonatal circumcision as justification. This claim is irrelevant as any surgery is too expensive if unnecessary.  Regarding “complications,” mounting evidence indicates that both circumcised men and their partners experience sexual problems as a result of the male having had his foreskin permanently removed.  The AAP’s 2012 technical report on circumcision has been roundly criticized for reasons also applicable to the CDC recommendations: cultural bias, cherry-picking of evidence, repeatedly stating that benefits of circumcision outweigh its risks without providing evidence of the harms, and omitting information about the functions of the foreskin. In sum, the CDC exaggerates the benefits of circumcision, minimizes its risks, utterly ignores the function and benefits of the foreskin, and blithely disregards critical ethical and legal questions regarding the rights of all children to enjoy their normal, natural sex organs. 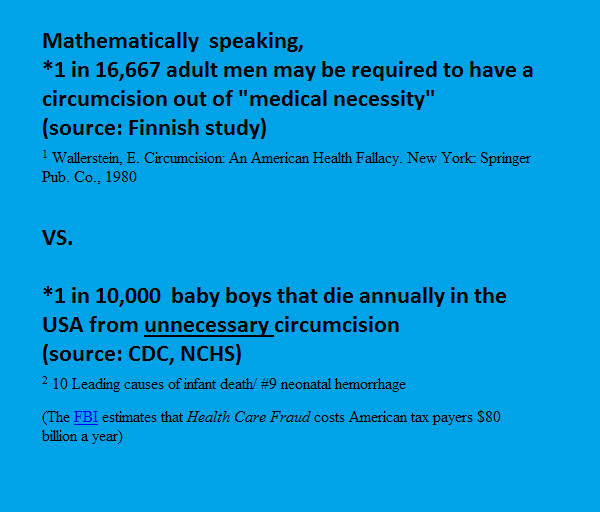