Circumcision of male infants is tantamount to grievous bodily harm, a criminal act, and should be subject to prosecution!
Some viewpoints - such as the idea that it is good to torture a newborn child - are not worthy of respect. -unknown 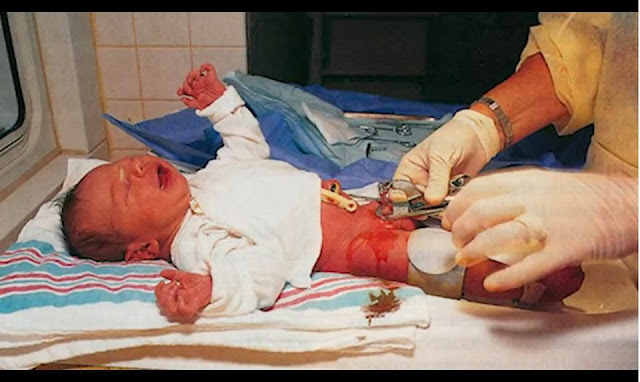 REPORT: Many doctors performing circumcisions are poorly trained for procedure

The mere mention of the word circumcision is enough to make some men cringe, and a new study suggests they might have more reason to flinch than they thought.
Many of the doctors who perform the procedure are generalists and poorly trained for the task, possibly explaining the steady stream of complications seen in emergency wards, some with life-long consequences, conclude researchers in Hamilton, Ont.

Given that there is relatively little medical reason to perform circumcisions, it is important at least that physicians know what they are doing to prevent slip-ups, the Hamilton physicians’ newly published study says.
“People who do circumcisions, the majority of those who do circumcisions, they are not surgeons. They have some training, but never enough to go out and do these operations,” said Dr. Jorge DeMaria, the McMaster University urologist who headed the research. “They go to a colleague and say ‘Show me how to do it’ … The majority don’t do it that well.”
He stressed that he is not anti-circumcision or necessarily opposed to non-surgeons doing the procedure. He and his colleagues developed a training program and video that seemed to produce better results, and drew favourable comments from as far away as Europe after being posted online.
“This operation will continue to be done forever and ever so, when they do it, I want them to it correctly,” said Dr. DeMaria.
Until recently, the McMaster Children’s Hospital in Hamilton where he works would see about two cases a week of newborns suffering from mistakes made in neonatal circumcisions. While most are relatively minor, rare cases can be serious, including bleeding that requires transfusion, the specialist said. Two or three boys in Canada have died in the last decade.
“We got sufficient numbers of [complications], and also a lot of unhappy parents, because the cosmetic results were not very good,” said Dr. DeMaria.
Their experience does not seem unique. In Halifax, the IWK Health Centre likely sees a similar number of complications, the majority of them more cosmetic than severely debilitating, said Dr. Peter Anderson, a pediatric urologist at IWK and president of the Canadian Urological Association. Most problems can be fixed with further surgery, he said.
A 2008 study indicated that about 32% of Canadian parents had their boys circumcised, a procedure that involves removing some or all of the foreskin from the penis. The reasons for doing it reported in a Public Health Agency Survey included health and hygiene; to be like the father and brothers; and religious belief. Jews and Muslims both advocate the practice.
Debate has raged for years about its merits, with critics viewing the operation as mutilation inflicted without the child’s consent, while advocates argue that it helps prevent disease. The American Academy of Pediatrics last year softened its previous position that circumcision was medically unnecessary, saying that the benefits somewhat outweighed the risks, though the group still did not recommend the procedure be performed routinely.
The Canadian Pediatrics Society is considering the issue, too.
The McMaster group surveyed 54 of the 87 physicians it identified in southwestern Ontario as carrying out circumcisions, the team reported in the Canadian Urological Association Journal.
The majority were non-surgeons — family doctors or pediatricians — and none of those had received any formal training. They were shown a picture of a baby with a condition called “concealed penis,” which should make him ineligible for a circumcision given the high risk of complications. Still, a third of the respondents said they would operate on the child.
After offering a training course to non-surgeons and putting the instructional video online, the number of complications observed in the Emergency Department actually dropped, to about one case every two months, the article said.
The founder of a Canadian anti-circumcision group said errors that some might consider minor can actually have lasting impact, making the organ unsightly and undermining sexual satisfaction.
Some blunders have given rise to malpractice lawsuits, noted Glen Callender of the Vancouver-based Canadian Foreskin Awareness Project.
“There’s a lot of men walking around with a lot of damage on their penis,” he said. “I can put you in touch with guys who have no head on their penis, or no penis because of a botched circumcision.”
The McMaster study did not look at the “mohels” who perform Jewish ritual circumcision, carried out on the eighth day after birth, most of whom are not even doctors. Dr. DeMaria said he understood that some are, nevertheless, very skillful at it.