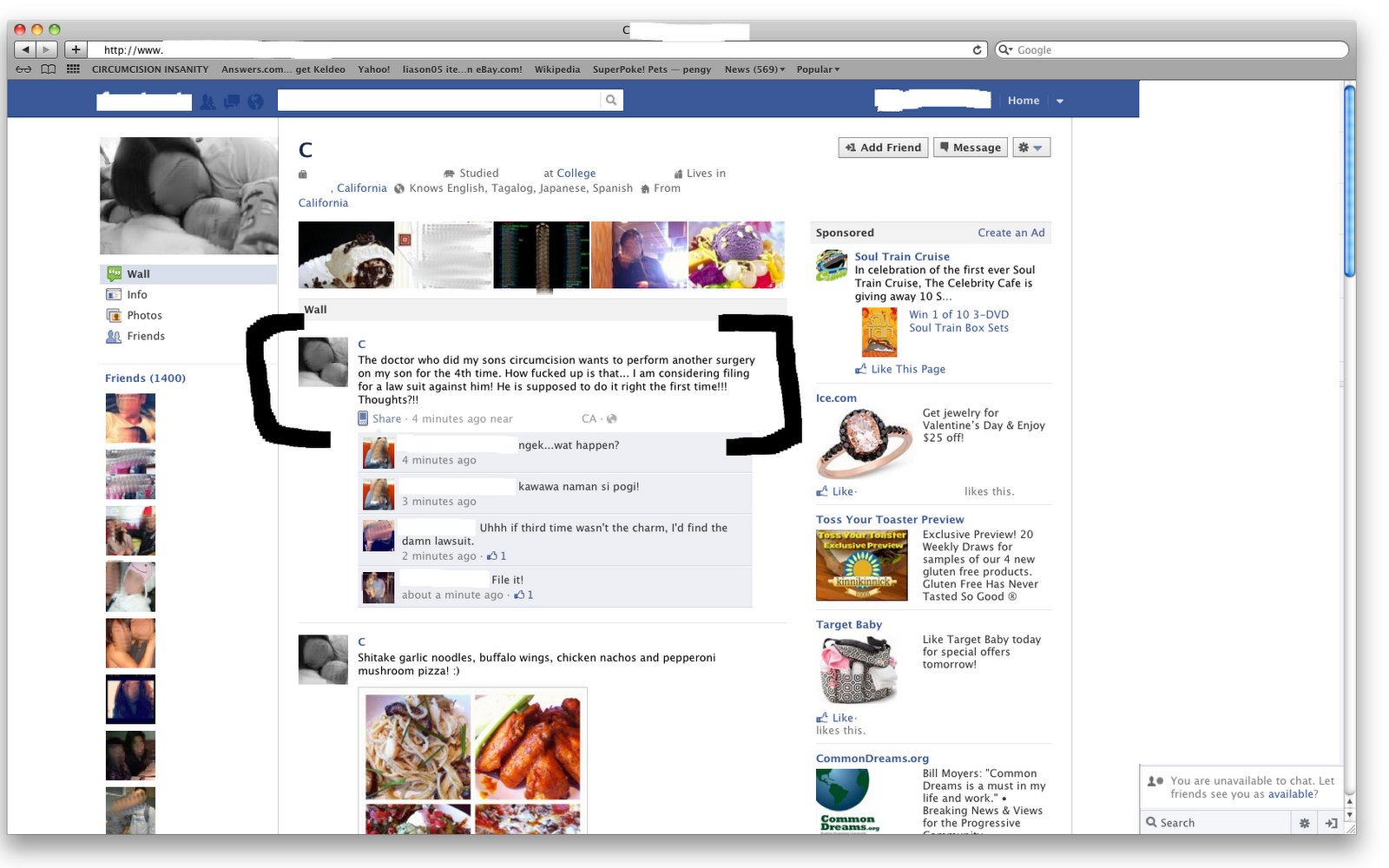 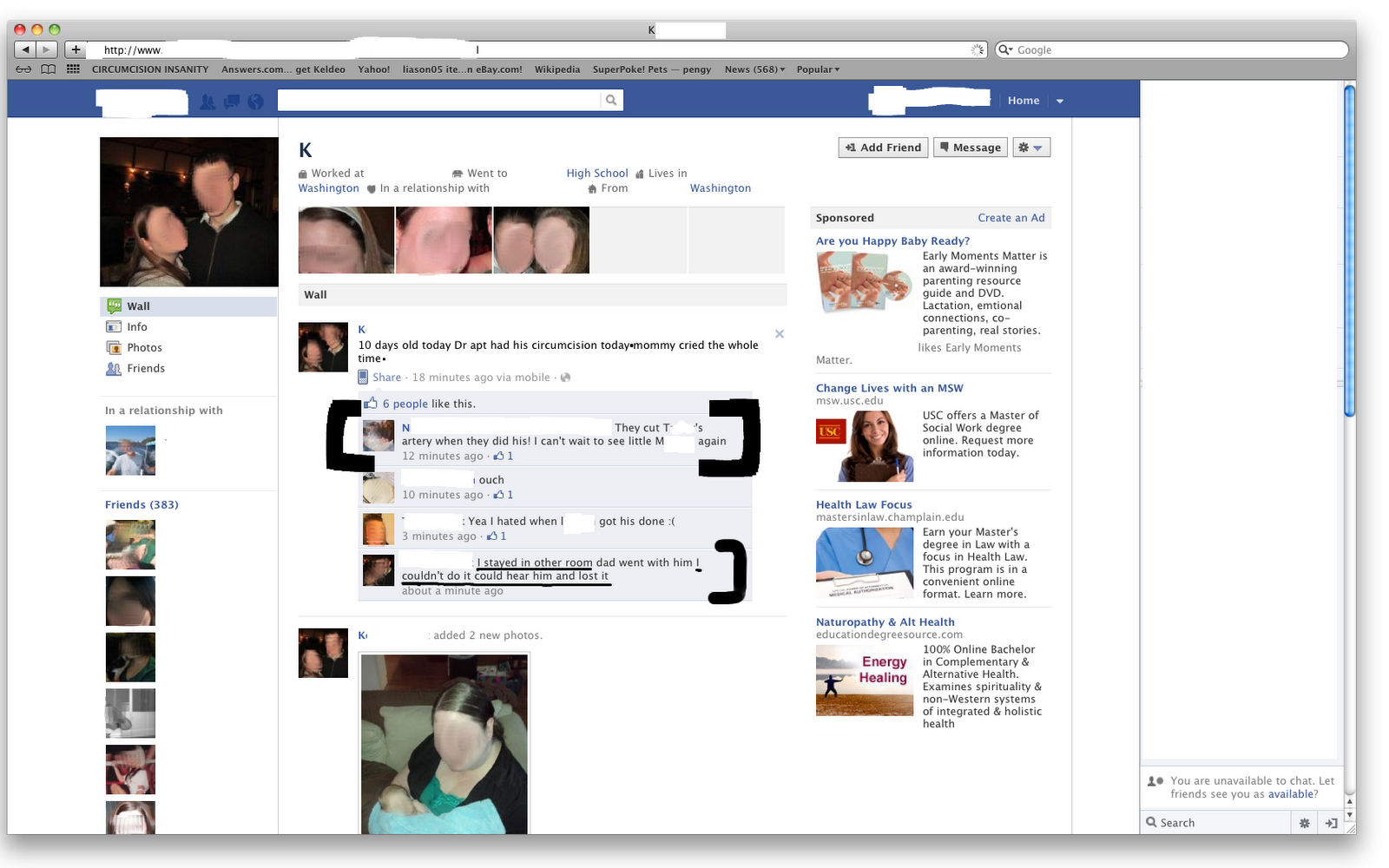 Email ThisBlogThis!Share to TwitterShare to FacebookShare to Pinterest
Labels: complications

As soon as I found out I was having a boy I started researching circumcision. I did not like what I saw. So much pain for such a little person to deal with for what I found to be no apparent reason. I had totally made up my mind and I was completely against such a barbaric elective surgery.


But as soon as people find out you're having a boy it starts... the questioning. "Your gonna get him cut right?" "Are you circumcising?" "Who's doing his circumcision?" I always answered with, "I won't be getting him circumcised." Then came the "Ohhhh..." with an eyeroll. I let it go...


His father was all for circumcision, but I put up such a huge fight that he finally just let me have my way. My dad wanted him to be circumcised as well, but I just ignored him the best I could. At the time of Lance's birth there was quite a lot going on in my life. My grandmother was dying of brain cancer and she passed five days after Lance was born. I was extremely close to her - she was like a second mother to me. She was home on hospice in the end, and we took care of her 24/7. So I was beyond stressed at this time.


It was at this point in Lance's young life that someone said something to me that would ultimately cause me to circumcise my baby. Their words hurt so bad, that it made me do it. I don't want to discuss specifically what was said, or who said it, but just know that it still hurts me today.


After my Grandmother passed, we had to travel for her funeral, and while we were out of town I decided I couldn't risk my son hating me in the long run, so I planned to have him circumcised when I got home. I called and made the appointment, and my aunt and I took him to be circumcised.


We arrived around 11am and waited for a few minutes until the nurse called us back. She took Lance from me and told me to go back to the waiting room - she would be back in about twenty minutes. So we sat down and waited. Only minutes later she came out again and called us back. There were two big double doors to get to the back of the office where the rooms for circumcision surgery were. As soon as she opened one of the doors I could hear Lance screaming. I was in shock.


She led us into the room and I almost hit the floor. There lied my beautiful, perfect baby strapped to a board screaming so very hard he was purple and couldn't catch his breath. His hands were so tight his knuckles were white. I rubbed the only place I could, his forehead. I stroked it and told him I loved him and that he would be okay. The nurse just kept saying over and over again, "He's going be fine." She made me feel like what I was doing was wrong - as though I shouldn't be attempting to console my baby.


The doctor was in the room but he didn't say anything to me - he just left the room. The nurse then told me that she couldn't get the bleeding to stop. She asked my aunt to hold pressure while she left the room to get a Styrofoam band to wrap around his penis to try and stop the bleeding. After she applied the band she put his diaper back on and once again told us he was fine, and that we could leave to go home, so we did.


We drove the forty-five minute drive back to our house. When we arrived into town I stopped by my mom's office where she worked as a nurse to tell her about what had just happened. She told us to go on home and she followed to take a look at Lance. When she took his diaper off, it was completely and totally full of blood. She looked at me and said, "We're going back now."


I called to let them know we were on our way, and off we went back to the doctors office. They took us back where they held pressure for what seemed like forever! A doctor came in and looked at Lance and left the room without saying anything to us. Another doctor came in and did the same. Finally, the first doctor came back and told me they nicked a vein and she was getting a surgeon to come over and cauterize the vein. So there we sat with my bleeding, screaming baby and waited for the surgeon who never came.


After waiting for a very long time my mom went into the hall to ask someone where the surgeon was. They sent us across the street directly to another surgeon’s office. He called us back, took off Lance's diaper and said, "Oh no - they've cut all the skin off." He sent us to the emergency department at the hospital where they performed an emergency surgery to stitch the top of Lance's penis to the baby fat around the base to stop the bleeding. The doctor had cut all the skin off the shaft of Lance’s penis. He bled for eight hours.


When Lance was eighteen months old he had his second corrective surgery. We waited in a room with Lance, where they had us dress him in a tiny hospital gown and gave him toys to play with while we waited. And then they came to get us. My mom and I walked Lance down a long white hallway following the doctor. We came to a set of big swinging doors and the doctor turned to us and said this is our stop. So I kissed Lance, told him I loved him, and handed him over to a complete stranger. I turned around and walked away, holding onto my mom all the way back down the hallway, sobbing. We waited in a huge waiting room with lots of other people waiting for family who were in surgery also. It seemed like years, and then finally they called for "the mother of Lance." As soon as I saw him, I just wanted to hold on to him forever and never let him go. There he was - drugged and limp, in his tiny hospital gown. They put him in my arms and wheeled us to recovery. He was pitiful. But I thought to myself, "It is over! Thank God! We did it! He's fixed!"


When Lance was two years old we had another appointment with his pediatric urologist who informed us he would indeed need yet another corrective surgery. One week later, there we were in the same boat we had already been in. Only difference this time was that when they came out post-op to call for "the mother of Lance," I went back to my uncontrollable, screaming son. I could do nothing to help him. He just cried, "Owie, owie..." It was horrible. The next few weeks were even worse. Every time he walked he cried owie. His penis was so swollen I thought it was going to pop. Then the night terrors started. He would start screaming with his eyes still closed, and I could not wake him up, and could not do anything to calm him. He just screamed and screamed for months, every single night.


After this, we were finally told there would "most likely" be no more surgery! Lance will have problems in his future because of the circumcision, but there is no way to know just how bad they will be, and there is nothing we can do to fix them. The guilt I feel hurts so bad. Why wasn't I strong enough to stand up for my baby? How am I going to explain this to him when he's older? Nothing in my life has ever hurt this bad. I scarred my baby - my sweet, perfect baby.


Becca is mother of two beautiful boys, and is very much in love with their father. Working as an amateur photographer, Becca is attending cosmetology school in addition to mothering her little ones. Family is most important to her, and while she knows that a huge mistake was made in her son's case, when she knew better, she did better: her second son is intact. Becca hopes that by forgoing a hospital gag order to not speak about what happened to her son, and honestly sharing Lance's story, "zillions of others" will be saved from the same. ❤
at 8:59:00 PM 1 comment: Links to this post

Email ThisBlogThis!Share to TwitterShare to FacebookShare to Pinterest
Labels: complications